Treatment for sleep apnea in a child will be determined in large part based on the cause and may include allergy treatment, tonsillectomy

The Treatment of Sleep Apnea in Children

Treatment for sleep apnea in a child will be determined in large part based on the cause and may include allergy treatment, tonsillectomy, and an orthodontic protocol called rapid maxillary expansion. In some children, the use of continuous positive airway pressure (CPAP) machines may be helpful. As children grow closer to adult stature, other treatment options become available. 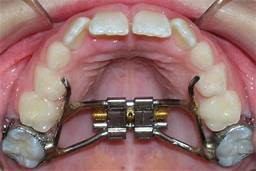 The treatment of obstructive sleep apnea in children often requires a multi-disciplinary approach, potentially including multiple medical and dental specialists. One of the key professionals who may be involved is a specially trained orthodontist who may perform rapid maxillary expansion.

Children who have been diagnosed with obstructive sleep apnea may be referred to an orthodontist for treatment with rapid maxillary expansion (RME). This treatment involves placing an expandable brace on the roof of the mouth that increases the width of the maxilla. The dentist directing this treatment typically has had specialty training and may be a member of the American Academy of Dental Sleep Medicine (AADSM) and preferably APP-NEA.

The hardware, sometimes called a butterfly brace, typically slides over several rear teeth and is held in place by stable metal brackets. At the center of the roof of the mouth, there is an adjustable component. After being placed, the brace may further be adjusted by a parent with a special key. These adjustments will gradually increase the amount of pressure applied to the teeth and hard palate.

Rapid maxillary expansion gradually widens the hard palate, which is the forward part of the roof of the mouth. This bony structure is part of the maxilla. The roof of the mouth is also the floor of the nasal passage. Therefore, when it is widened, the space through which air moves through the nose is also increased in size. As a result, more air can pass into the throat and lungs, and this may reduce the collapse of the airway that contributes to sleep apnea.

This expansion also has some secondary effects. Your child will also have a wider smile as a result. In addition, there will potentially be more space for teeth to come in. Importantly, teeth extraction due to crowding can be avoided. These teeth are necessary to incite further bone growth of the jaw. When they are removed, the jaw may not be pushed to grow as much as it could, resulting in an increased risk of sleep apnea later due to micrognathia.

Which Children Are Candidates?

Currently, rapid maxillary expansion is recommended for children who have been diagnosed with obstructive sleep apnea. There are a few restrictions, however. Your child must have teeth onto which the brace can be placed. Children as young as 3 years old may be treated, but it depends on the comfort of the orthodontist. The child must be able to sit still for placing the brace and for adjustments. Therefore, younger children may have more difficulty tolerating the treatment, even though it would be equally effective.

In addition, this treatment is best for children who are earlier in their growth and development. Ideally, children in early grade school may be treated (from ages 4 to 10, most often). Later in childhood, the growth plate of the maxilla fuses. Bones throughout the body have areas of calcified bone and regions of continued expansion and growth. In the maxilla, when growth ends, this zone becomes calcified and further pressure applied will not lead to continued expansion. Some orthodontists in Europe have applied sufficient pressure with the brace to reopen this growth suture after closure and provide additional expansion, but this is not a standard procedure.

Children typically tolerate this treatment very well. There may be some mild initial pain with placement and after adjustment. Most children do not notice the brace. It is virtually hidden and is hardly visible outside the mouth. It does not significantly affect eating or speech.

As the hard palate is being widened, the teeth that are in it will begin to space out. At a standard treatment age, these are typically baby teeth. When the adult teeth come in, the spacing will likely decrease substantially. Some children may require cosmetic orthodontics to improve alignment and optimize teeth spacing. There may be a risk in children who were born with a cleft lip or cleft palate, and this should be disclosed to and discussed with the orthodontist.

If you are interested in rapid maxillary expansion to treat your child’s sleep apnea, start by speaking with your sleep specialist to see if a dentist specializing in the therapy is available in your area or find one in APP-NEA’s network of providers. It may also be important to incorporate other adjunctive treatments, including soft tissue surgery such as tonsillectomy and adenoidectomy, allergy treatment.

Why is Sleep Important for Children - Part 1 (Healthy Brain)

Why is Sleep Important for Children - Part 2 (Growth)

Why is Sleep Important for Children - Part 4 (Fight Infections)

Why is Sleep Important for Children - Part 5 (Easier to Concentrate)

Why is Sleep Important for Children - Part 13 (SIDS)

Why is Sleep Important for Children - Part 20 (Inflammation)

Why is Sleep Important for Children - Part 22 (Issues with Growth)

Why is Sleep Important for Children - Part 23 (Sleep Deprivation, Failure to Meet Sleep Needs, and Obesity)

Why is Sleep Important for Children - Part 24 (Growth Hormone Deficiency)

Part 26 - The Evaluation of Sleep Apnea in Children

Part 27 - The Treatment of Sleep Apnea in Children

Part 28 - The Treatment of Sleep Apnea in Children (Allergy Treatment)

Part 29 - The Treatment of Sleep Apnea in Children (Tonsillectomy)

Part 32 - The Treatment of Sleep Apnea in Children (CPAP)