Patient
Physician
Patient
<< Back
Letter to the Editor Regarding the Updated American Academy of Otolaryngology-Head and Neck Surgery Foundation Clinical Practice Guideline on Tonsillectomy in Children
Published on Feb 28, 2019 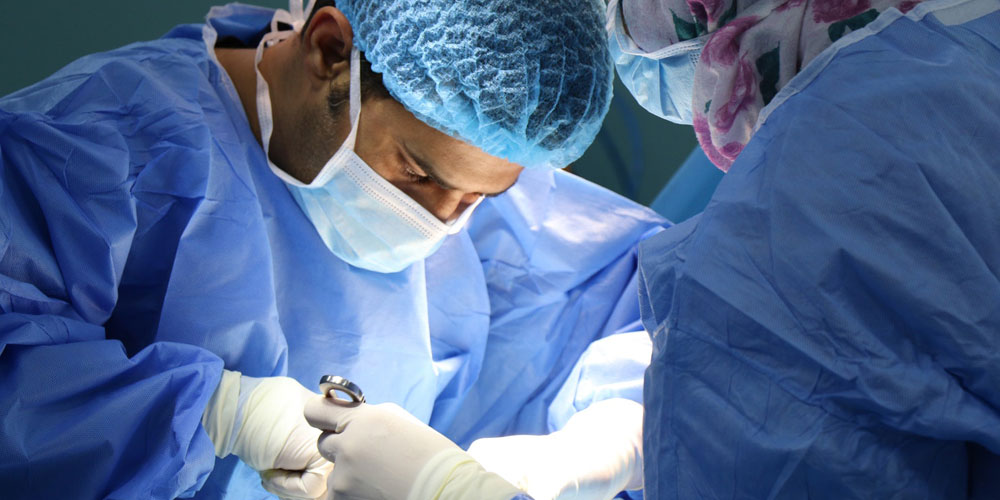 The American Academy of Sleep Medicine (AASM) appreciates being invited to participate in the development of the updated clinical practice guideline on tonsillectomy in children by the American Academy of Otolaryngology-Head and Neck Surgery Foundation (AAO-HNSF).1 We realize this was a tremendous undertaking and are pleased to endorse the AAO-HNSF guideline. This letter provides an overview of the guideline, focusing on areas of most interest to sleep medicine providers, and outlines areas in which it differs from the recommendations established by the AASM.2

Tonsillectomy is one of the most common surgical procedures in the United States with almost 300,000 ambulatory procedures performed annually in children under 15 years of age.3 The indications for tonsillectomy have changed with time. Thirty years ago, approximately 90% of tonsillectomies in children were done for recurrent infection. According to the AAO-HNSF guideline, the primary indication for tonsillectomy currently is obstructive sleep-disordered breathing in two-thirds of patients.1

The AAO-HNSF published its original clinical practice guideline on tonsillectomy in children in 2011 and the updated guideline was published in February 2019 as a supplemental issue of the journal Otolaryngology–Head and Neck Surgery. The guideline is intended for clinicians in any setting who interact with children ages 1 to 18 years old who are under consideration for tonsillectomy. The purpose of the guideline is to educate clinicians, patients and/or their caregivers regarding the indications for tonsillectomy and optimize perioperative management, reducing variations in care and enhancing patient outcomes. It strives to emphasize the need for evaluation and intervention in special populations and improve counseling and education of families who are considering tonsillectomy for their child.

There were 15 key action statements identified in the updated guideline which were expanded from 10 in the original guideline including 2 new statements related to poly-somnography (PSG) indications. Throughout the guideline, “sleep-disordered breathing” was changed to “obstructive sleep-disordered breathing (oSDB)” to clarify that tonsillectomy should be done for obstructive breathing in sleep. The key ac-tion statements of most interest to sleep medicine providers are numbers 4–8 and 12, since they relate directly to tonsillectomy for oSDB, indications for PSG, education regarding persistent or recurrent oSDB after tonsillectomy, and inpatient monitoring after tonsillectomy in high-risk patients. The other key action statements are also important clinically as they relate to ton-sillectomy recommendations for infection, perioperative pain counseling and management, perioperative antibiotics, intraop-erative steroids, and monitoring of post-tonsillectomy bleeding. The key action statements of most interest to the readership of the Journal of Clinical Sleep Medicine will be reviewed here.

KAS 4. Tonsillectomy for oSDB: Clinicians should ask caregivers of children with oSDB and tonsillar hypertrophy about comorbid conditions that may improve after tonsillectomy, including growth retardation, poor school performance, enuresis, asthma and behavioral problems.

The above statement is important for helping clinicians and caregivers make informed decisions about tonsillectomy in children with clinically diagnosed oSDB. It highlights the im-portance of considering comorbid conditions that may be over-looked but could affect the decision to proceed with surgery.

The AASM practice parameters for the respiratory indica-tions for PSG in children states that PSG is indicated when the clinical assessment suggests the diagnosis of obstructive sleep apnea syndrome (OSAS) and in children being considered for adenotonsillectomy to treat OSAS.2 The AASM task force found, after extensive literature review, that clinical evaluation alone does not have sufficient sensitivity or specificity to es-tablish the diagnosis of OSAS. While the comorbid conditions should be a consideration, the gold standard for making the diagnosis of OSAS is overnight PSG.

KAS 5. Indications for PSG: Before performing the tonsillectomy, the clinician should refer children with oSDB for PSG if they are < 2 years of age or if they exhibit any of the following: obesity, Down syndrome, craniofacial abnormalities, neuromuscular disorders, sickle cell disease, or mucopolysaccharidoses.

While this statement recommends obtaining PSG in obese patients, the text states that many pediatric surgeons are elect-ing not to do so and are admitting obese children to the hospital overnight with the assumption their OSA is severe. Admitting these patients is a financial burden that may exceed the cost of obtaining a PSG. In addition, hospitalization puts the patient at increased risk inherent with hospital exposures and impacts bed availability in pediatric hospitals.

Similarly, the statement recommends obtaining a PSG in pa-tients with Down syndrome, but the text describes that many otolaryngologists do not routinely do this. It further describes that parental accuracy of predicting OSA is poor and the risk of residual OSA after tonsillectomy is high. The conclusion was that information obtained from the PSG can help determine presence and severity of OSA, confirms appropriateness of tonsillectomy, and helps plan perioperative management and follow up in the high-risk populations.

As noted above, the AASM practice parameters for the re-spiratory indications for PSG in children states that PSG is in-dicated when the clinical assessment suggests the diagnosis of OSAS and in children being considered for adenotonsillectomy to treat OSAS.2 Additionally, the AASM quality measures for the care of pediatric patients with OSA, process measure 3, recommends objective assessment of OSA with PSG in chil-dren with complex medical conditions.4

KAS 6. Additional recommendations for PSG: The clinician should advocate for PSG prior to tonsillectomy for oSDB in children without any of the comorbidities listed in KAS 5 for whom the need for tonsillectomy is uncertain or when there is discordance between the physical examination and the reported severity of oSDB

Instead of “advocating” for PSG when the need for tonsillec-tomy is uncertain or when there is discordance between the physical examination and the reported severity of oSDB, the AASM practice parameter recommends a PSG. The supporting text acknowledges this difference and also points out a simi-lar position of the American Academy of Pediatrics (AAP), though the AAP suggests referral to a sleep specialist or oto-laryngologist if this service is not readily available.5

Rarely is surgery for OSA considered urgent thus delaying treatment to allow for appropriate PSG evaluation is warranted. Watchful waiting may also be beneficial since OSA may resolve in children.6 In terms of cost considerations, obtaining a PSG on a child is less expensive and less risky than performing surgery, especially in the case when the surgery may not be indicated.

Under the “Risks, Harms, Costs” section of the AAO-HNSF guideline,1 there is mention of the indirect cost of missed work by parents when obtaining a PSG, but the sleep studies are conducted at night and this is rarely the case.

There is an excellent table accompanying the text that sum-marizes the role and rationale for PSG in assessing high-risk populations before tonsillectomy.

This statement is intended to promote tonsillectomy as the primary surgical intervention for OSA in children. This is in agreement with the AASM and AAP. This statement was updated from the previous guideline that suggested counsel-ing patients and caregivers about tonsillectomy rather than recommending it. The change reflects more recent evidence that tonsillectomy results in significantly greater improve-ments in behavior, quality of life, symptoms and PSG findings when compared to observation as seen in the CHAT study.6 There were no differences in attention and executive func-tion between the groups studied over the 7-month period in the CHAT study.

There is acknowledgement that benefits of tonsillectomy are most clearly observed in healthy, normal weight children and may be modified by comorbid conditions such as craniofacial, neuromuscular, genetic and metabolic disorders and that there is a paucity of data to suggest tonsillectomy should be first-line treatment in these children, especially if the OSA is mild.

KAS 8. Education regarding persistent or recurrent oSDB: Clinicians should counsel patients and caregivers and explain that oSDB may persist or recur after tonsillectomy and may require further management.

This statement accurately highlights that tonsillectomy is not always curative, especially if there are comorbid conditions, and that oSDB may recur. Counseling of caregivers is impor-tant, so that they can make an informed decision regarding a surgery that may not be curative. It also points out the impor-tance of longitudinal care in the treatment of oSDB and sug-gests having a low threshold for performing a postoperative PSG if there are residual symptoms, which aligns with the AASM practice parameter recommendations.

In the text, there is a discussion about the low referral rate for preoperative PSG by otolaryngologists with an even lower postoperative referral rate. This was reflected in a table that is meant to be a reference for clinicians to counsel caregivers of patients regarding the persistence or recurrence of oSDB after tonsillectomy. In the table, there is a statement that a PSG is not necessary in all cases and that access may be limited by the availability of sleep laboratories and willingness of insur-ers and third-party payers to cover the cost of testing. As dis-cussed above under KAS 6, performing a PSG on a child is less expensive and less risky than performing surgery, especially if the surgery is not indicated. Insurance or third-party payers are typically supportive of this approach. Published data are not available to support concerns about potential for limited access to pediatric sleep centers.

While the AASM does not have guidelines for postoperative inpatient monitoring, the AAP recommends hospitalization for children less than 3 years, severe OSA documented on PSG, cardiac complications of OSA, failure to thrive, obesity, cra-niofacial anomalies, neuromuscular disorders and current re-spiratory infection.5 The AAO-HNSF guideline acknowledges in the text that children with complicated medical histories are at increased risk of postoperative complications and the clini-cian should have a low threshold for hospitalization. Both orga-nizations acknowledge that individuals should be assessed on a case-by-case basis for inpatient monitoring after tonsillectomy.

The AASM appreciates and values the tremendous amount of work that the AAO-HNSF put forth in producing this compre-hensive guideline. The endeavor was a thorough, collaborative, and detailed approach to an important and common pediatric procedure. The AASM is pleased to endorse the AAO-HNSF guideline as we agree with most of their key recommenda-tions, and the few areas in which it differs from the recom-mendations established by the AASM are highlighted in this letter. We congratulate the AAO-HNSF on the publication of the clinical practice guideline on tonsillectomy in children and look forward to future partnerships.

With the exclusion of Robin Lloyd, MD, the authors represent the 2018–2019 Executive Committee of the AASM. This letter to the editor is intended by the AASM to help physicians and other health care providers make decisions about the appropriate treatment of patients with OSA. It is to be used for educational and informational purposes only.