Patient
Physician
Patient
<< Back
Is Your Lack of Sleep Causing You to Overeat?
Published on Sep 04, 2018 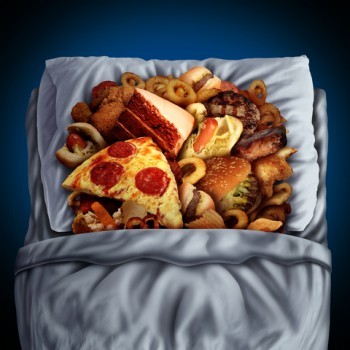 Not getting enough zzz’s every night? In addition to putting you at risk for higher mortality rates, heart disease, diabetes, and Alzheimer’s, sleep debt can also increase your risk of overeating and as a result, obesity. In the October 2017 volume of Sleep, the paper, “Unrecognized Sleep Loss Accumulated in Daily Life Can Promote Brain Hyperreactivity to Food Cue” found a correlation between obesity and sleep debt.

What is Sleep Debt?

Sleep debt is the cumulative deficiency of not getting sufficient duration of sleep each night over an extended period of time. Sleep debt can lead to both physical and mental deterioration over time. There are two types of sleep debt. The first is when someone is deprived of sleep for a period of 24 hours or longer at a stretch. The second, accumulated sleep debt, happens when a person continually gets less sleep than needed. As sleep debt increases, side effects continually worsen without a stopping point. While accumulated sleep debt seems less serious than the first type, studies have shown that a person who slept for a period of six hours each night for ten days straight had the same negative effects as the person who is completely sleep deprived for one day.  The recommended duration for a typical adult is 7-8 hours at a stretch per 24 hour period.

A recent paper has shown that sleep deprivation activates the reward system in response to food stimuli. So, a bit more simply, the brain is hypersensitive to food triggers when we are sleep deprived and lowers the hormone leptin and raises the hormone ghrelin. Leptin tells the brain you’ve had enough to eat, while ghrelin stimulates appetite. On top of that, in a sleep-deprived state, your body actually releases higher levels of insulin after you eat.

So, let’s paint a picture with this, let’s say you haven’t had more than five or six hours of sleep per night for the last two weeks or waking up feeling sleepy and tired or perhaps with a headache (no, not your spouse kind of a headache) or perhaps with a dry mouth and sore throat and wondering why you are still tired and sleepy during the day for someone who slept for the required 7-8 hours a night. During the day you're not only unfocused but a bit irritable as well and to make yourself feel better, you have a gooey, rich brownie, or that yummy ice cream (the food stimuli reward system at work). Since your hormone levels are off, you aren't full after one decadent brownie (low leptin), so you make yourself a sandwich (high ghrelin). After you've had your mini-feel-good-feast, your body starts pumping out the insulin, making you lethargic and more prone to gain weight and hence insulin resistance syndrome.

Now, if you are a person who has undiagnosed or untreated obstructive sleep apnea (OSA), it can be even more dangerous. You may think you are getting eight hours of sleep, but due to the repeat apnea episodes, you may be getting much less sleep than you believe. OSA is a common disorder that affects a reported 32 million Americans. It is when an individual experiences shallow breathing or stops breathing for 10 seconds or longer each time, several times an hour while sleeping. These pauses can occur anywhere from 5 to more than 60 times in one hour before regular breathing resumes, usually accompanied with a loud snort or choking sound.

How to Get Optimal Sleep

Once you’ve identified you have sleep debt, start making changes in lifestyle immediately. Create a sleep schedule so you are getting a consistent seven to nine hours of sleep per night. Turn off screens at least one hour before bed and lower the temperature to somewhere around 65 degrees (though most experts agree that anywhere between 60 and 72 will be conducive to sleep based on your personal preference). Avoid caffeine and other stimulants in the evening; in fact, it’s best to stop consuming caffeine at noon to promote better sleep. Studies have also shown that regular exercise performed before 2 pm can also help maintain a sleep schedule, while vigorous exercise before bed makes falling asleep more difficult. For those looking to add some self-care to their bedtime ritual, a warm bath and meditation have both proven to be successful in promoting healthy, restful sleep.

Have more questions about sleep apnea and treatment? Contact us at APP-NEA for answers to your questions and find a sleep medicine practitioner near you.