Infants are children up to 12 months old, and toddlers are between 1 and 2 years old. This article will concentrate on the differences in these youngest age groups. A young patient’s increased parasympathetic tone, brain, underdeveloped respiratory center, and behavioral responses increase the risk for airway complications and respiratory failure (Figure 1). 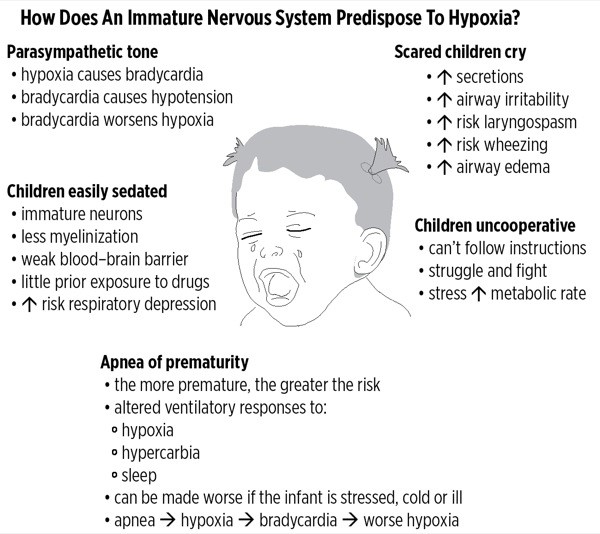 Hypoxia in a Child Causes Bradycardia!

Consider bradycardia in a child to be caused by hypoxia until proven otherwise! Hypoxia in an adult or older child usually triggers a sympathetic response, producing a tachycardia that improves oxygen delivery. Bradycardia is a late and very dangerous sign of imminent cardiovascular collapse.

In contrast, bradycardia in babies and young children may be the first sign of hypoxia—not the last. The small child’s immature nervous system has a better developed parasympathetic nervous system. Babies spend a lot of time eating and sleeping, and not so much time engaged in fight-or-flight activities. As a result, hypoxia triggers a vagal response and slows the heart.

Infants and small children have a cardiac output that is rate dependent. Bradycardia significantly lowers cardiac output and oxygen delivery; hypoxia and hypercarbia worsen. Acidosis develops, further depressing the myocardium. Cardiac arrest can occur very quickly in the hypoxic child and must be treated urgently with oxygen, ventilation, and if needed, atropine.

In one study, among 1,018 children who were difficult to intubate, 9% of patients developed hypoxemia, and cardiac arrest occurred in 16% of these hypoxemic patients. All cardiac arrests were preceded by hypoxemia.

Nerve myelination is incomplete and the blood–brain barrier is poorly developed at birth. Central nervous system immaturity, combined with relative lack of exposure to drugs, can cause respiratory depression and apnea even in older children. Children often become very sleepy, and perhaps apneic, with even small doses of pain medications. It’s difficult to differentiate between a child crying from fear and one crying from pain. It’s very easy to overmedicate with pain medications to try to calm a crying child.

In addition, altered control of ventilation, with periodic breathing and apneas, can be seen up to about 60 weeks post-conceptual age. Young infants, especially if they have a history of prematurity, must be observed carefully when ill or when undergoing anesthesia because of the high risk for apnea. Many institutions will observe ex-premature infants less than 60 gestational weeks overnight following general anesthesia.

Babies and frightened younger children are rarely cooperative. Even simple tasks such as preoxygenation may prove impossible. Immature behavior increases the risk for hypoxia in children in the following ways:

● Stress and physical struggling greatly increase metabolic rate and oxygen consumption at a time when the child may not be able to improve oxygen delivery.

Make Care as Unthreatening as Possible

If you separate a toddler from his parent, force an oxygen mask on the child’s face, increase the sevoflurane to high, and then try to do a mask inhalational induction, the child will typically fight you as though their life depended on it. If the child has aspirated a peanut or has croup, panic and crying will only jeopardize the airway and worsen hypoxemia.

We routinely perform mask inhalational inductions on children, often with a parent present, to avoid stressing the child. We then place the IV access after the child is asleep. Inducing general anesthesia without IV access does increase risk that must be weighed against any benefit of proceeding without starting the IV first. Always be prepared for emergency airway management in case of complications, such as laryngospasm, by having the supplies for intramuscular injection immediately available.

Premedication, such as oral midazolam, can improve cooperation and perhaps provide amnesia, but has been associated with a longer postoperative stay and a higher incidence of emergence delirium. Sedation should be used with extreme caution if the child has a compromised airway or respiratory failure.