Patient
Physician
Patient
<< Back
The Pediatric Upper Airway Is Prone to Obstruction
Published on Jul 21, 2021 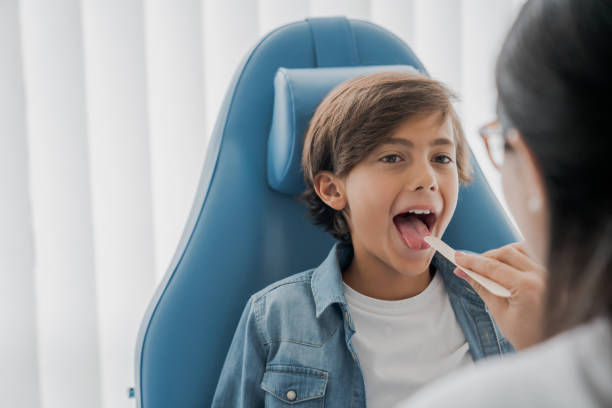 The Pediatric Upper Airway Is Prone to Obstruction

Children are not small adults. Pediatric anatomy differs in four main ways: size, composition, position and shape. We can often tell how old a child is simply by looking at head size, facial characteristics, neck length and body shape. It should not be surprising that the inside of the child is changing as well. Infants, who have the greatest anatomic differences, have the highest risk for airway complications (Figure 1 and Table 1). 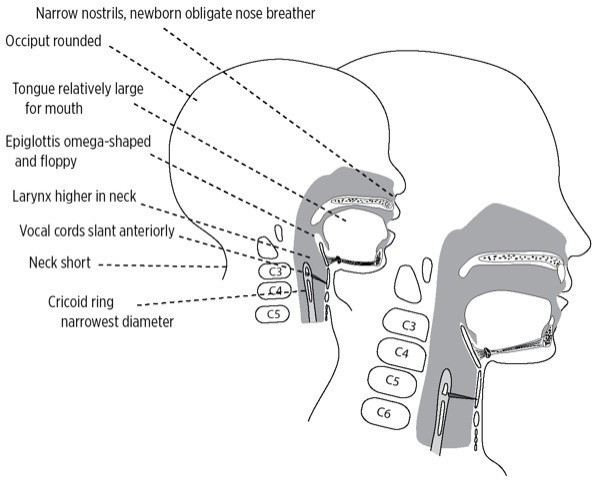 Table 1. Differences in the Infant and Toddler Airway Predispose To Airway Obstruction


The infant’s large head relative to body size, rounded occiput, large tongue, and larynx positioned higher in the neck all predispose to obstruction if the head flexes forward or the child loses consciousness. The laryngeal and tracheal cartilages are soft and easily compressed (Figure 2A and B).

Figure 2 - The larynx and trachea of the infant and toddler are so soft that extreme flexion (A) or extension (B) of the head can obstruct the airway.

Infants have suffocated while being held in an extreme flexed position during lumbar puncture. Studies of infant positioning for lumbar puncture show that oxygen saturation drops significantly more (28% reduction) when an infant is held in a lateral recumbent position with the head flexed forward onto the chest, rather than lateral with the head extended (18% fall) or in a sitting flexed position (15% decrease).

The larynx itself has a different shape (Figure 3). Unlike in the adult, the airway in infants and children is wider at the top, above the glottis, and narrows below the larynx in the subglottic area (Figure 4). This funnel shape predisposes the child to a greater risk for airway obstruction from processes causing subglottic edema, such as croup or intubation trauma.

.The infant larynx differs markedly from the adult in size, shape, composition and position. As the infant grows, the epiglottis changes from short and omega-shaped to elongated and spade-shaped. 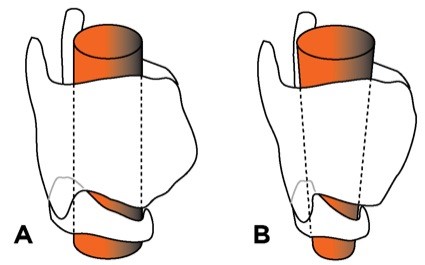 A. The adult larynx is cylindrical.

B. The infant larynx is funnel-shaped. This narrowing predisposes to obstruction and affects choice of endotracheal tube.

The larynx and trachea are so small that minimal swelling can cause tracheal obstruction. In an adult, 1-mm circumferential swelling with a 10-mm trachea causes a 44% decrease in cross-sectional area and triples the resistance to airflow. If an infant with a 4-mm trachea develops 1-mm circumferential edema, there is a 75% decrease in area, with an associated 16 times increase in resistance (Figure 5). Infections such as croup, or a coin stuck in the esophagus but compressing the soft trachea, can place serious limits on the infant or toddler’s ability to breathe. 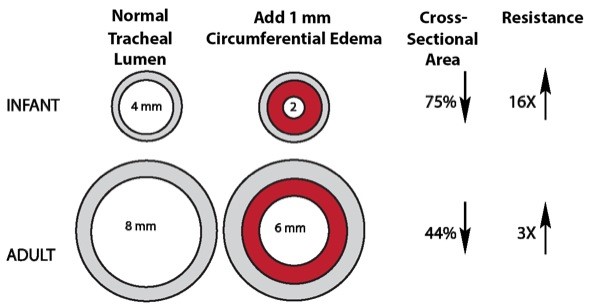 Figure 5 - Comparison of effects of 1-mm circumferential edema on the adult and infant airways.

As a child gets older, tonsils and adenoids often fill the airway, causing obstructive sleep apnea and difficulty with manual ventilation. Figure 6 shows hypertrophied tonsils almost meeting in the midline—the so-called kissing tonsils. If you look closely, you can see that the epiglottis and vocal cords are high enough in the neck to be seen behind the back of the tongue. 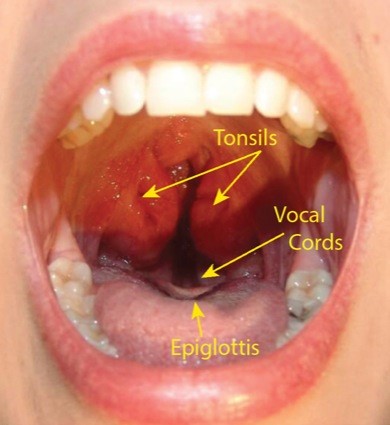 “Kissing tonsils” in an older child with sleep apnea. Note that you can see the top of the epiglottis and the vocal cords, showing how high in the neck those structures can be in a child.

Take Anatomy Into Account When Opening the Pediatric Airway

Extreme extension or flexion of the child’s neck can obstruct the airway. A child younger than 2 years, especially an infant, has a relatively large occiput and a short neck. The larynx is higher in the neck right behind the tongue. A pillow placed under the head of the infant or toddler will bend the head forward over the chest, force the tongue backward, and worsen airway obstruction. It will also make it harder for you to tilt the head back to open the airway. Instead, you should place a small rolled towel under the shoulders in children younger than 2 years to open the airway (Figure 7A).

As the child reaches 2 years of age, the occiput gradually becomes less prominent but is still rounded. Keeping the head in a more neutral position is helpful at this age. At some point in the older child, placing a roll under the child’s head, as you would with an adult, improves the airway (Figure 7B).

Placing the ear canals level with the chest can assist in opening the airway and can make ventilation easier. For an infant, this may mean placing a rolled towel under the shoulders to compensate for the large, rounded occiput.

Oral Airways Must Be the Correct Size

The correct-sized oral airway places the flange immediately outside the teeth or gums and positions the tip near the vallecula. An airway that is too small places the tip in the middle of the tongue, bunching the tissue and worsening obstruction. It can obstruct the lingual vein and cause tongue swelling. Too large an airway extends from the mouth and prevents sealing the mask over the face. It can fold the epiglottis down over the glottic opening and worsen obstruction (Figure 8A and B).

Airway obstruction can worsen if the wrong-sized oral airway is inserted: A. Too small forces the tongue down over the larynx. B. Too large pushes the epiglottis downward over the glottis.

To estimate the correct size, place the airway next to the child’s jaw parallel to the mouth and judge where it will lie. The tip should extend from the center of the patient’s mouth to the angle of the lower jaw (Figure 9). 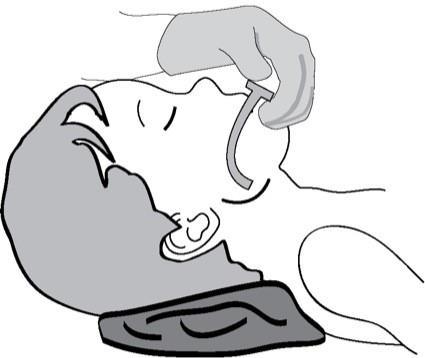 You can estimate the correct-sized oral airway by placing the device next to the patient’s face. The tip should extend from the mouth to the angle of the lower jaw.

Beware loose baby teeth! If one comes out during airway management, make sure you know where it is. If you can’t find it, take an x-ray.

Nasal airways can cause nosebleeds, especially in 3- to 6-year-old children with hypertrophied adenoids. They can become plugged adenoidal tissue, which can then be aspirated. Be very gentle when using one and lubricate it well.

The correct-sized nasal airway should reach from the patient’s nostril to either the earlobe or the angle of the jaw (Figure 10). It is usually 2 to 4 cm longer than the correct oral airway. Selecting the size of a nasal airway based either on nostril opening or comparing it with the size of the little finger is not accurate because the cartilaginous turbinate’s narrow the inside of the nasal passages. Once inserted, a nasal airway should not be so large that it blanches the skin around the nostrils—a sign of ischemic compression. 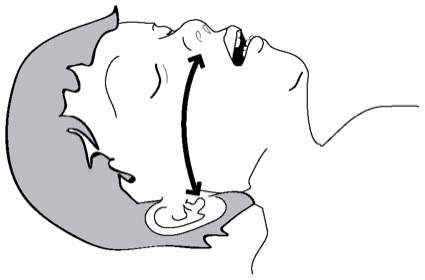 If you don’t have a nasal airway small enough for the child, you can cut an ETT to the appropriate length. Cut the adapter end and position the beveled tip in the posterior pharynx above the glottis, but not down the trachea. Reinsert the adapter, once cut, to prevent loss of the tube into the oropharynx. An ETT is stiffer than a typical nasal airway, so insert it gently.

You can manually assist ventilation through the nasal airway by closing the mouth and attaching an ETT adapter to a ventilation device (Figure 11). 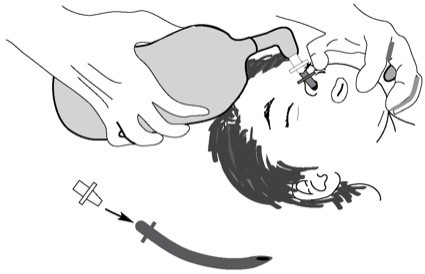 You can use a nasal airway to ventilate a patient by sealing the opposite nostril and mouth when you squeeze the bag. Make sure the airway is open by lifting the chin and tilting the head as appropriate. Ensure the chest is rising as you ventilate.